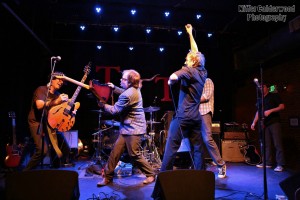 Stag is not Seattle’s Next Big Thing

Stag is a new band from the northwest whose making ripples in the water of Seattle rock. Formed in 2010 by a host of some of the city’s finest musicians, Steve Mack (vocals), Ben London (guitar), John Randolph (guitar), Rob Dent (drums), and Pete Everett (bass), the group is highly evolved. By mixing pop rock from the late ’60’s and early 70’s with straight ahead rock, the group has avoided the “Deathcab” stereotype and have forged their own path, “We love so many bands, it’s hard to pinpoint,” says London, “I guess a Stag’s DNA includes strains of Cheap Trick, Big Star, T-Rex, but also English power pop rock bands such as the Hollies and the Sweet.”

Ben London describes the band as “internal combustion for a hybrid world” which is a fair assessment. In addition to playing the guitar, London also writes all the music, “To me a successful song has a strong melody with words that can be left to personal interpretation,” said London, “it’s always an amazing feeling to write something and then hear the band bring their own flavors and suggestions to it.”

“This isn’t our first rodeo,” says London. Ben has been in a plethora of bands, most notably Alcohol Funny Car and has acted as engineer/producer with such bands as the punk outfit The Gits. Steve Mack has had an equally impressive career, the singer has produced such artists as Stereolab and even played bass on Yoko Ono’s release New York Rock release. His crowning achievement was lead singer for That Petrol Emotion. “We’ve probably had enough records between us to power a radio station or at least populate one hell of a long playlist,” says London.

While the band shines brightest during their live performances, they enjoy recording equally as much,”Both are their own thing,” said London, “We love playing live. It’s a bacchanal of volume and cheap beer. As for recording, we all love the process, working with our old friend Producer Jack Endino, and adding the frosting that makes the songs “pop” in the studio.”

Now a little older and wiser, Stag is simply a creative outlet for all members and they have no aspirations of “making it big, “I think the fact that we’re not trying to make the band our career frees us up to create however or whatever we want,” said London. “There’s not a lot of “will people like this?” conversation happening when we practice or record.”

When asked where he saw the band in five year, London said “Probably exactly where we are right now. Playing shows, putting out new music once or twice a year. Pushing ourselves to write better songs. It feels like V2 of the band with John Randolph playing guitar is starting to hit its stride. We would love to go to Spain or the UK. ”

While Stag has no interest in becoming the next big thing, they just might if they keep on releasing great music.